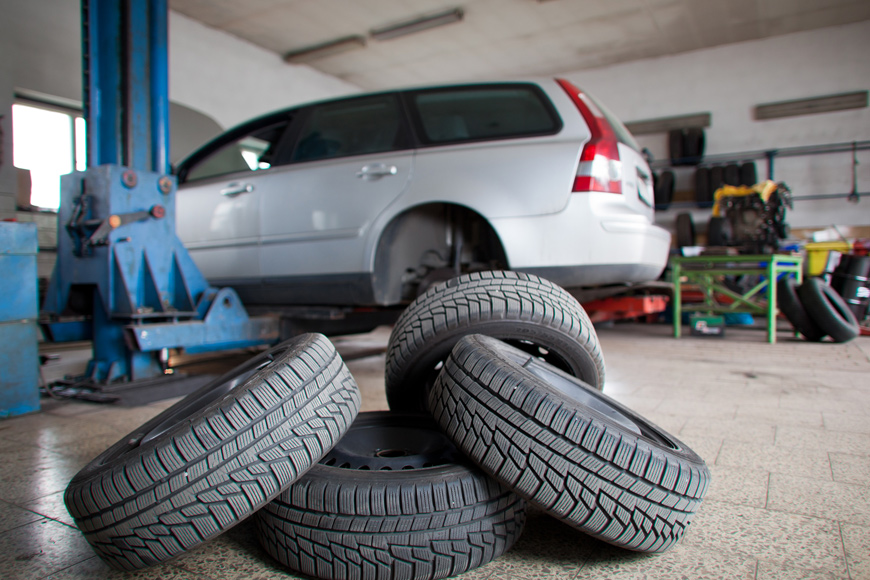 10 Things You Didn’t Know About Tires

Beyond their obvious round and black traits, tires are paragons of mystery. But tires evolve as quickly as cars do, so there’s always something new to learn. Here we present the latest trends and technologies, plus some engineering truths that you’ve likely never heard before.

Skinny tires, much taller and narrower than the norm, are coming back.

BMW’s i3 electric/plug-in hybrid, which relies on minimal rolling resistance to achieve acceptable driving range, is leading the charge. The i3’s Bridgestone Ecopia EP500 tires have aspect ratios ranging from 55 to 70 (narrow tread, tall outside diameter) to reduce energy loss as the tire rolls into and out of its footprint. This shape also reduces the car’s frontal area and aerodynamic drag. To compensate for a reduced air cavity and a smaller-than-normal footprint, Bridgestone uses an elevated inflation pressure to deliver the desired acceleration, braking, and cornering traction.

In the strictly theoretical sense, increasing just the width of a tire does nothing to improve acceleration or braking traction.

A wider tire will have a shorter contact patch, which is precisely what you don’t want when the goal is maximum longitudinal grip. Jamie McNutt, the replacement-tire development manager at Bridgestone Americas, says that a longer, not wider, contact patch helps you climb faster to maximum braking grip.

The problem with this theory is that the only time you can change one and only one variable is in simulations. In the real world, varying one detail drives other changes. For example, widening a tire but maintaining the same aspect ratio leads to a taller sidewall.

Again, though, tire engineers are always working with multiple variables. Newer performance cars as the Corvette which uses skinnier tires than its predecessor yet increases its roadholding with a stickier compound. To maximize traction in all directions, tire engineers aim for an even pressure distribution throughout the contact patch.

Static electricity build-up is an old concern that has returned to haunt modern tires.

An inadequately grounded vehicle is an issue during refueling and when occupants slide out of the car’s interior. Modern tire compounds have become less conductive as manufacturers have greatly reduced the amount of carbon black in rubber compounds to cut weight and rolling resistance.

The solution is using what tire engineers call a grounding strip or an antenna tread designed into the tire. At the centerline of the tire, there’s a thin continuous strip of rubber with a compound that’s engineered to provide an efficient conductance path between the tire and the road surface. (The antenna tread design is quite evident in modern motorcycle tires.)

Tire manufacturers don’t expect spares to become obsolete in the near term.

Despite the proliferation of roadside assistance, inflator kits, and run-flat tires, nothing matches the mobility of a fifth tire. “Many customers want a spare in their car for peace of mind, whether or not they intend to ever fix a flat on the road,” says Bridgestone’s McNutt. It’s possible that we’ll see more car companies sell spare tires as optional equipment, as Ford does with the Mustang. For automakers, this practice saves money and reduces the weight of the vehicles they use for fuel-economy and emissions testing. For customers, it means their car can be equipped exactly as they want. Best of all, it makes it more likely that a driver will learn what his or her vehicle is equipped with when they make the purchase, not when they experience their first flat tire.

A run-flat tire can roll for more than 100 miles after it loses pressure.

Tire manufacturers typically claim that a deflated run-flat can cover 50 miles at 50 mph, but if you slow down, you can stretch that distance much farther. Lee Willard, a product development engineer at Michelin, says the range roughly doubles if you drop your speed to 40 mph. Slow down more, and the range continues to grow. It’s all about reducing the amount of heat generated in the tire. “It’s like flexing a paper clip,” Willard says. “If you flex it fast, it will break. If you bend it more slowly, it will last longer.”

Much like automakers, tire manufacturers are working doggedly to reduce the weight of their products.

Bridgestone developed a new steel-cord formulation to trim the weight of its new Ecopia EP422 Plus low-rolling-resistance tires. The challenge was to reduce the gauge of the steel cord, which trims weight, without diminishing the tire’s ability to survive today’s harsh environment fraught with potholes, broken pavement, and other road hazards. At Michelin, engineers are focused on reducing the weight at the tire tread, because this also has the greatest effect on reducing the inertia of the tire and wheel. One way to do this is by using a shallower tread depth while maintaining the tire’s life with longer-lasting tread compounds.

The old days of multiple tire companies vying for a particular vehicle program are giving way to a more sophisticated process.

Automakers now rely on the proven trust and the established relationships they have with tire companies. Tire selection begins with a list of the automaker’s proposed—and usually challenging—design requirements and performance targets. Each tire manufacturer comes to the table with an assessment of what can be achieved, and the carmaker awards the program based on that information. Next, experimental tires are produced and subjected to rigorous internal testing, then provided to the car manufacturer for several rounds of joint ride evaluations. During this process, feedback from the chassis engineers improves tire designs to achieve ride, handling, and noise performance objectives. A cozier relationship between car and tire companies doesn’t mean the work is any easier, though. To develop the Pilot Super Sports for the BMW M3 and M4, Michelin produced 3884 prototype tires over the course of 19 months.

There are more than 200 different materials in the typical tire.

You may have heard about the steel belts and the Kevlar-like plies, and you almost certainly know that the outer tread is rubber. But did you know that the rubber itself often contains metals, including cobalt and titanium, to help the compound bond with the steel belts? Yokohama has used citrus oil in some tires to control how the tread viscosity changes with temperature.

One recent industry stride is the use of silane (silicon hydride) as an efficient coupling agent between inorganic silica—used to enhance wet and snow traction—and the more traditional organic polymers in the tire tread. Silica became a popular means of improving cold- and wet-weather grip 15 or so years ago. This was especially important as all-season tire popularity grew. As luck would have it, silica is a major contributor to low rolling resistance. Silane materials are currently under intense study to achieve future gains in tire performance.

Autonomous cars may pave the way for airless tires.

Several manufacturers have experimented with airless tires that combine a wheel and a tire in one composite molding, like Michelin’s Tweel. These are now in production for low-speed industrial and off-road (lawnmower, skid steer) applications. Michelin also uses airless tires on golf carts at its own facilities. Willard predicts that if this technology ever makes the leap to cars, it will have to start with a specialized, low-speed vehicle. A vehicle such as Google’s autonomous car, restricted to dense urban areas and operated as an Uber-like service, would be the perfect application.

Book your appointment now and get $5 discount.